Nagasaki Suigyoza, which even gourmet TV entertainers are fascinated by

The popular Japanese comedian Daisuke Miyagawa raved about it on his blog, and the restaurant has received many love calls from the entertainment industry. It is a nationally popular restaurant having had many TV and magazine interviews. What captivates people is this sui-gyoza.(Sui-gyoza is a Chinese dumpling in the special soup.)The juicy meat from the carefully selected ingredients without garlic or chives, but the plump skin produced by the particular manufacturing method are a unique gem. In addition, there are plenty of original champon noodles, such as "Nama-Karasumi champon" (dried mullet), "Mabo-champon" which is addictive and spicy, and the "Gokujo champon" with carefully selected ingredients and strong chalky noodles. 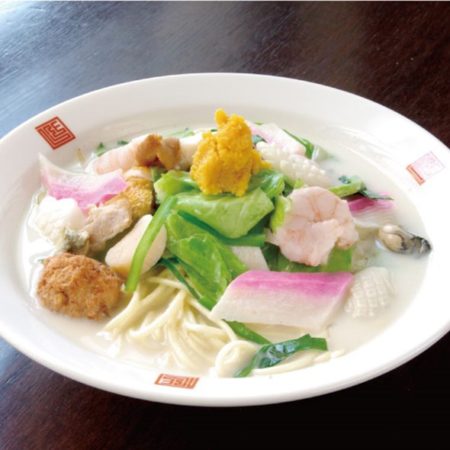